(How to Make Sure) It Gets Better 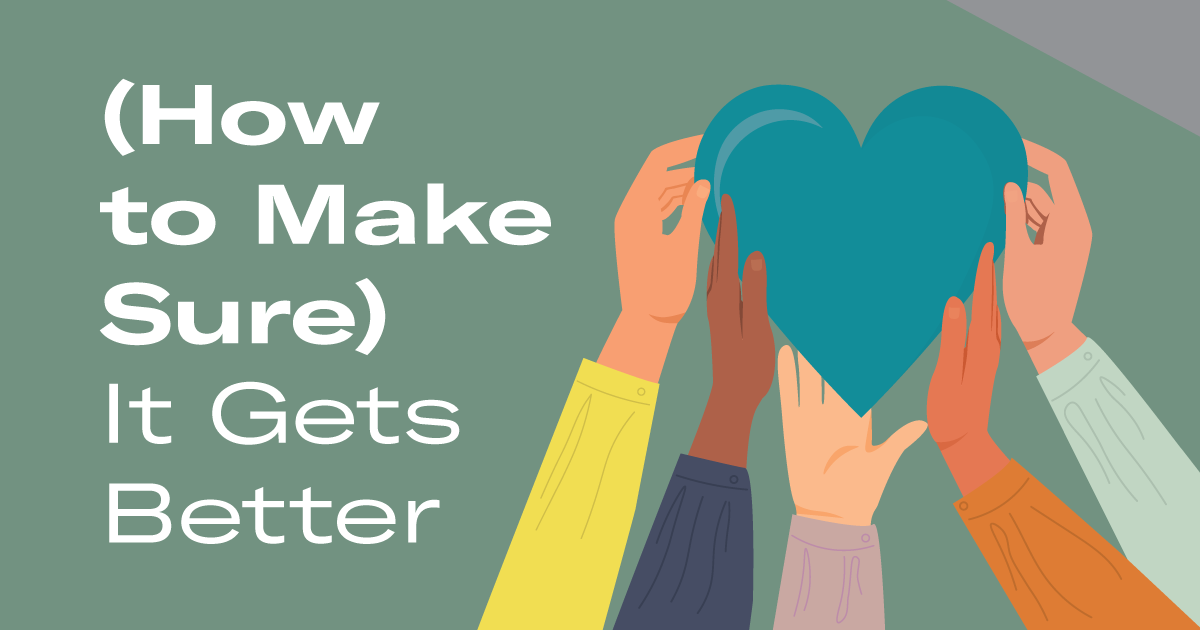 This piece is written to capture the shifting norms, language, and anxieties surrounding relationship visibility and privacy boundaries. This autobiographical blog is designed to read as a casual social media post guided by memories of identity crises, bullying, homophobia, and doxxing. The piece also captures how power dynamics in the virtual space create very real consequences in life offline.

Growing up visibly gay and gender non-normative in upstate New York (NOT NEW YORK CITY) juuuuuust before it was cool — the earliest of the aughts (the 2000s) — pretty much sucked, if you’ll pardon my French. Most of my peers didn’t really talk to me, except for my three best friends: all girls, all straight. They were wonderful friends and lovely people. But, in that way of things (“it was a different time”?!), when my queerness started to become really noticeable—around middle school—they protested. A memory that still stings is when one of them said she wouldn’t room with me on a school trip to Canada if I cut my hair short like I’d been talking about doing. I did cut my hair; she did still room with me; and she even put my tiny bangs up in a hilarious front ponytail on the long bus ride to where Drake lives. People must have thought it was weird that these girls did still hang out with me, though, because in high school, a boy I’d almost never spoken to randomly came up to me to ask if had been dating X; had left her for Y; and then cheated with Z??? I was like, “I have never even been kissed!!!” (I definitely didn’t say that).

One doesn’t really expect empathy or even acceptance from middle schoolers in such a time and place. Moreover, violence hurts much less from those we expect it from (in this blog I will talk about how people who are not bullies sometimes end up bullying, and how we can avoid the conditions for that to happen). People we imagine to be “like us,” or whom we respect and admire — that’s when it really counts. A boy who was almost too gay to function (as we say when we are from the early aughts), but was at the time in Big Denial, got mad at me once during class, also in middle school. We’d been friendly since we’d been sitting next to each other, but didn’t know one other well. Anyways, I shushed him when the teacher started talking (yeah I hate me, now, too), and he absolutely laid into me. I’m not going to repeat the things he said, but it was all about how disgusting and unnatural my queerness was. Chillingly, this was whispered all through the rest of the lesson, and by the end of class — thank god, the last of the day — I was working hard to hold back tears. Obviously, there was a heavy dose of self-loathing at play for him in this moment of his life. He has since come out, and been a generally awesome person, by all accounts. I’m not mad at the boy this man was, then — far from it. My point is, it hurts a lot more when it comes from other queers. “Lesbians love to eat their own,” says Alice on the L Word (did I mention I’m from the early aughts).

Here’s where it gets weird. Perhaps it sounds like I am also eating my own. But here goes: Power relations are incredibly compelling; queers know it, and are generally much more willing to avow it. Historically, we love us a good December-May or dom-sub relationship. These kinds of relationships are crucial for queer community building, mentorship, and chosen family. Until recently, mainstream histories were not documenting LGBTQ pasts. The question of whether or not the word “gay” should even be said in classrooms is, once again, under debate. Unlike some marginalized identities, being gay does not necessarily — in fact, often doesn’t — mean one comes from parents who share the same alienated identity. Gay histories and cultures are usually not passed down between parents and children within biological familial contexts. Finding a Daddy — or a Mommy — to teach us history, safety, culture, sex, is a valid and joyful part of seeking chosen families. Reader, this is what I thought — still do — when I entered a relationship with a woman much older than I, and in a position of structural power over me within my profession.

I had a lot in common with this woman. We were intellectually passionate about the same things. We shared an identity and a profession. But suffice to say, mistakes were made, and many of them mine. The biggest was entering a structurally power-differentiated relationship where it overlapped with my professional life. Lots of things count as structural power imbalances, which is another thing we are not often taught, because within heterosexuality, power imbalance is inherent and normalized (*gestures vaguely at patriarchy*). Within queer relationships — within any relationship — we should be asking ourselves: Who makes more money? Does one or more of you have white privilege? Passing privilege? Who owns a house? Where is the generational wealth? At the back of these questions: If the worst happens, what is the worst thing that could happen? It’s hard — almost impossible — to ask ourselves this stuff when we are in love. Who wants to imagine fighting, rancor, or the generally bad behavior that sometimes results from breakups when falling in love? When making material commitments? When announcing relationships in public, whatever that means in your situation? People have feelings about their partners (and definitely about their exes). That’s kind of the point! It would take a saint to never complain to friends about their gf; bf; future ex wife; smokin’ hot they/them. But. It is absolutely not OK to complain about your partner to people with power where they work. When you work at the same place(ish), it gets reallll tricky. The crux is that we should not have to trust our partners — or future exes — to be saints.

When we fell in love, I was very concerned about the age difference: what it would look like, to her people and to mine. What I should have been worrying about was the professional overlap. I hadn’t considered that, because I was 1) sharing a profession with my lover who had a position of power within that profession, and 2) much younger than she, and just starting out, professionally, the stakes were really high when we started fighting, and eventually broke up. (And got back together, and broke up, and so on. You’ve met lesbians, right?). During this time, my ex posted about me in a private Facebook group, a lot. Because her main friend community consisted of senior people (they shared an age demographic, after all) in my field, it got scary for me real fast. We all know that social media can be vicious: Typing hate is easier than saying it to a human face; people are quick to pile on and rile each other up; people say things they don’t mean the next day, and they’re preserved in writing. Because it’s a social space, it’s easy to imagine that we are just talking to our friends. But we need to remember that it can be screenshotted and shared, or returned to in unpredictable ways. As a platform, it can also erase structural power differences. All of this happened, in my case. I didn’t expect a bunch of queer women with PhDs in the Humanities to be so inhumane, and obviously, I cared a LOT more what they thought than I would have from people less close to home. The combination of punching down, as older people with power in my profession piled onto me, and queer-on-queer bullying, was absolutely devastating. Dear reader, I was suicidal as f***, as the French say. Not only was my relationship ending (heartbreak in your drama-twenties is a whole other blog post); it felt like my career was ending before it began.

My ex had given me a code name to protect my anonymity, but because there was so much work overlap, some people who knew me “in real life” recognized me or knew who I was already. After my ex was complaining about something or other — hyperbolically, I suspect — one of these people doxed me. “Doxing” basically means outing someone on the internet; publishing identifying details about them so that they can be found, generally with malicious intent. To be honest, I’m nervous even writing this, in case some of the pilers-on read it, put the pieces together, and decide to blackball me, professionally. Social media is not not real life; it has real-life consequences. The point is that really bad things can happen, even if your lover has undertaken to protect you with measures like anonymity.

As the late, great Mac Miller says: That’s on me. I wish I had thought about the potential consequences of dating across structural differences; I wish I had set clear boundaries and expectations about social media exposure within such a relationship; I wish I had a thicker skin about violence from other queers. But all that is why I’m writing this blog post. Please do as I say, and not as I have done. I’ve said it before, and I will still die on this hill: One of the best things about queer relationality is that we get to learn — intimately, familialy — from each other’s experiences, including our mistakes. Keep structural power in mind, protect yourself, and be kind on the interwebs.

Margaret Speer is a Ph.D. candidate in English at the University of California, Irvine, where she runs the Queer Theory Reading Group, an events series and reading group. She has published on materialist feminism, situational identity categories, and contemporary trans politics. She lives in Long Beach, California and hails originally from Rochester, New York.