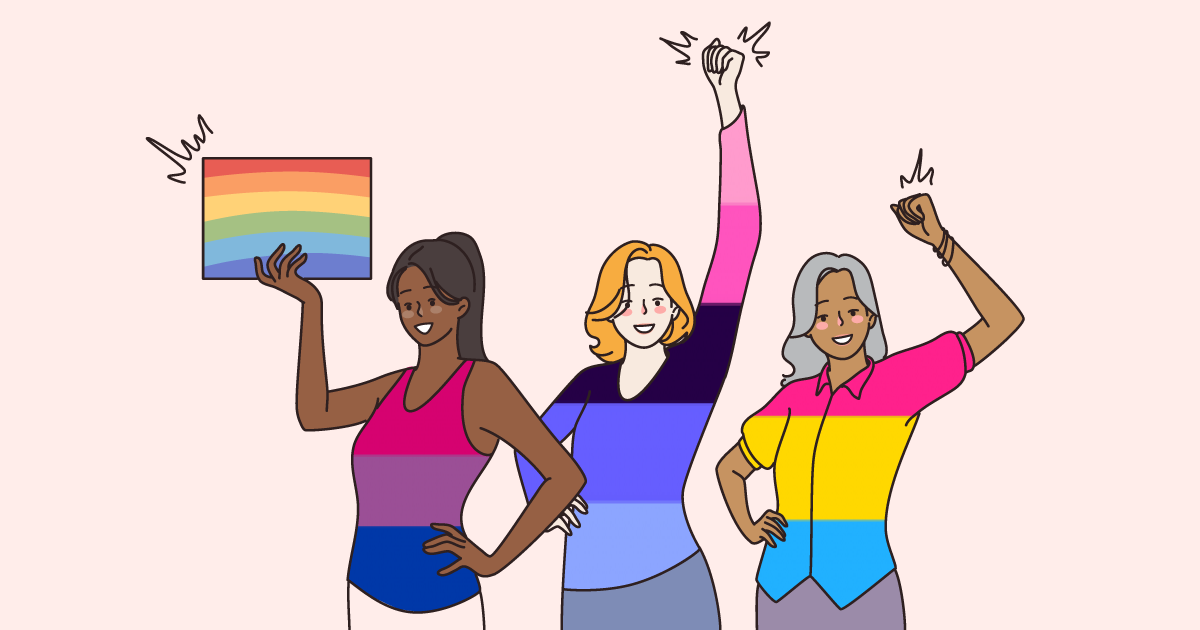 *This blog covers issues of sexual violence, self harm, and discrimination and may be triggering for some readers.

The Harm of Biphobia

Sexual violence perpetrated against the Bi+ community often has to do with the ways in which Bi+ people can be fetishized. Dr. Nicole Johnson at Lehigh University published an article in the Journal of Bisexuality outlining three social factors that contributed to higher sexual violence rates among Bi+ women: substance use, hypersexualization, and biphobic harassment. Bisexual women have above average rates of substance abuse —  most likely as a result of minority stress (high levels of stress faced by stigmatized minority groups). As Zachary Zane notes, “those who experience sexual assault under the influence may blame themselves, because they were intoxicated. This may be what's contributing to the worse mental health outcomes following sexual violence.” Regarding hypersexualization, in a 2016 study, 18% to 31% of people reported believing the stereotype that bisexual women are inherently hypersexual, promiscuous, or unable to be in monogamous relationships. That same study found that general perceptions around bisexual men were negative as well. As such, only 12% of Bi+ men felt safe coming out to others.

Research also indicates that biphobia and lack of Bi+ acceptance is equally common among straight and LGBTQ+ communities. Bi+ women are often accused of being performative for male attention because of the way bisexual women are depicted in pornography and popular culture. These harmful ideologies celebrate servitude to patriarchy, and put pressure on women to perform. As Dr. Nicole Johnson notes “the media, and pornography in particular, have a long history of depicting women as "bisexual" while engaging in same sex behaviors for the pleasure of male on lookers. Recently, this experience, which has been labeled "performative bisexuality" has become common place in bars and at parties where two girls/women engage in same-sex behavior for the purposes of arousing men.” This makes for a very confusing environment for individuals exploring and identifying their true selves and sexuality.

According to the Bisexual Resource Center, “Bi+ people are less likely to be out than their gay counterparts, and at a higher risk for mental health struggles and intimate partner violence.”

More specifically, the people in the Bi+ community face:

More specifically, #StillBisexual released an infographic indicating that nearly half of Bi+ women and trans folks and a third of Bi+ men have attempted suicide; 85% of Bi+ youth report feeling nervous or panicky, 81% usually felt depressed, and 96% have trouble sleeping at night.  Research shows that the majority of Bi+ folks make active efforts to conceal their sexual identity in everyday life. This might limit them from participating in Bi+ community meet ups, or from receiving Bi+ specific care for fear that they will be seen by others, labeled, and judged. Identity concealment is generally associated with a big increase in mental health issues. Loneliness is another factor Bi+ folks report in high numbers due to double exclusion (feeling left out of both gay and straight circles).

In addition to mental health and wellness issues, there are big barriers to physical health as well. According to Harvard Health, “Bisexual invisibility can affect the quality of medical care. A bisexual woman who is in a relationship with a woman, but also has sex with men, may not be offered birth control or counseling about sexually transmitted infections (STIs) at a doctor’s appointment, because she is (incorrectly) assumed to be a lesbian and not at risk for pregnancy or STIs.”

Overall, Bi+ individuals were more likely to identify with having a disability than both their straight and gay counterparts.

For more in depth details about the above disparities, see  Invisible Majority: The Disparities Facing Bisexual People and How to Remedy Them