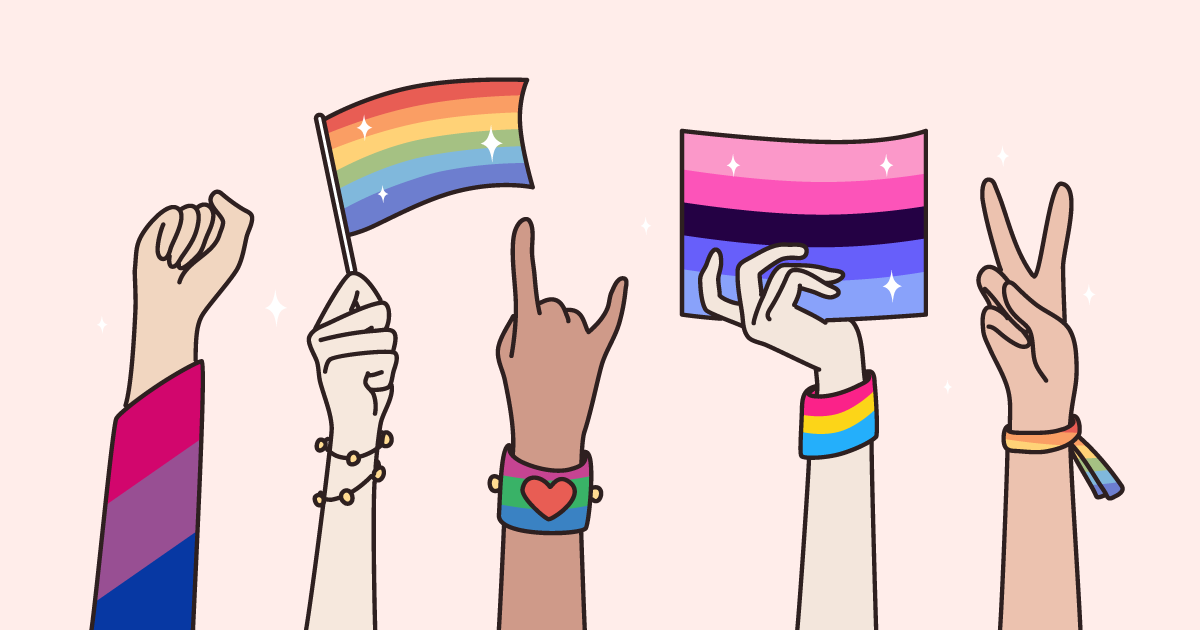 In the book A History of Bisexuality, Steven Angelides raises an important question: How can we construct the history of an identity which, until recently and even now, is thought to not exist? As with any history of social movements and identities, it’s first important to understand that learning history can also inadvertently be a practice of erasure. This means that “documented” or more dominant experiences are usually the only ones included in the historical narrative. This is especially so in the case of bisexuality, as its existence as a category and label has been protested socially since the word first entered the historical record and even now faces denial of its existence. We know bisexuality and other identities in the Bi+ spectrum are inherent to the human experience, so it existed well before it was captured in the historical record. That is, bisexuality as an experience, identity, or concept didn’t begin at any one point in time. Nonetheless, it is useful and important to understand key milestones in modern Bi+ experiences.

Just as sometimes happens today, historical figures who had feelings or relationships outside of strict heterosexual confines were historically regarded as gay even though they may have been, or identified as, Bi+. This is due to the assumption that binaries are the only alternative (meaning, someone either is or is not). If we look across cultures, bisexuality has been commonplace — from ancient Greece to the Han Dynasty in China.

In the west, bisexuality as a word was first printed in 1982 in a translated book called Psychopathia Sexualis by Charles Gilbert Chaddock. As the book title hints, bisexuality was mainly being documented as a form of deviant sexual behavior. In his exploration of psychology, even Sigmund Freud wrote: “A man's heterosexuality will not put up with any homosexuality, and vice versa” — meaning that one can either be straight or gay, and nothing else. This helps to illustrate how deeply rooted bisexual denial has been in society. And yet, still we see traces of bisexuality captured throughout time, up until the adoption of Bi+ as a title for plural identity.

The 20th century witnessed the beginnings of Bi+ identities in popular culture — albeit very marginally. Poet Edna St. Vincent Millay and singers Ma Rainey and Bessie Smith were among the earliest widely known people to be openly bisexual in the United States. One of the issues historians and queer scholars face when revisiting the Bi+ presence of the past is that we want to avoid making assumptions about people’s identities when we interpret history, because we don’t want to speak for them and misconstrue their lives. For example, the 1920s hosted an era of social experimentation, and the phrase “bisexual chic” emerged in reference to women’s desire to explore their sexuality with other women. While we may categorize this as bisexual behavior, what we must keep in mind is the strict patriarchal and homophobic structures of society at the time. Perhaps these women would themselves identify as lesbian, pansexual, or another title on the spectrum of sexuality — but since there was little social space to do so (as they may have felt immense pressure to marry and participate in a heterosexual lifestyle), they may be miscategorized as possibly bisexual. Therefore, despite the presence of what some would consider “bisexual behavior,” we cannot ever fully know how someone identified or if they had access to language that expressed their feelings, or the social support to explore themselves. Although not outwardly mentioned because of censorship, the film A Florida Enchantment featured bisexual characters (albeit with very offensive content). Bisexuality can also be found in a few literature references in the 1920s, mainly in the work of Virginia Woolf's Orlando: A Biography and Mrs Dalloway.

Ideas of sexual plurality (or the acceptance of more than one sexual identity in society) in mainstream America were largely introduced academically by the groundbreaking work of biologist and sexologist Alfred Kinsey in 1940, through his exploration of diverse sexual practices of men. His 1948 book Sexual Behavior in the Human Male introduced the realities of non-heteronormative (or not strictly straight) practices and relationships being had across the country with great numbers.

Ideas of bisexuality as a distinct self-proclaimed identity, however, didn’t begin to reach mainstream awareness in the United States until the 1960s, alongside queer activism and the growing gay rights movement. Stephen Donaldson (Donny the Punk) and Brenda Howard (who later went on to found the New York Area Bisexual Network) became the most well known bisexual activists at that time. The San Francisco chapter of the Sexual Freedom League included bisexuality as a label when activists like Margo Rila, Frank Esposito, and Maggi Rubenstein began to push for their inclusion. Bi+ folks were undoubtably present at the Stonewall Riot and the first Pride March — as Brenda Howard, the mother of Pride, identified as bisexual.

More Bi+ exposure took place in the 1970s due to the cultural impact of the sexual revolution of the 1960s, both in the media and in the social work of activism. This was also impacted by a wave of celebrities who came out as bisexual, such as Lou Reed, and in movies with Bi+ undertones like The Rocky Horror Picture Show. The Bi+ community began to find each other and start creating alliances and collective actions for visibility. Newsletters like The Bisexual Expression and The Bi Monthly emerged, and spaces for bisexual services, counseling, and awareness began to be carved out — mainly in New York and San Francisco. New popular literature also began to hit the market, such as View from Another Closet: Exploring Bisexuality in Women by Janet Mode, The Twyborn Affair by  Patrick White, and The Bisexual Option: A Concept of One-Hundred Percent Intimacy by Dr. Fritz Klein.

In 1974, Newsweek printed a special edition on growing curiosities of Bi+ identities, writing: “There is a new vibration to spring this year. While the birds and the bees are striking up their vernal hum, so are the boys and the boys and the girls and the girls. Bisexuality is in bloom.” Even famous anthropologist Margaret Mead petitioned for bisexuality to be seen as the human norm in the domain of sexuality — as sexology, or the scientific study of sexuality, began to be more flexible to encompass identities outside the gay/straight binary. This was echoed in Charlotte Wolf’s book Bisexuality (1977), which published interviews with 150 self-identified bisexual men and women and concluded that bisexuality was likely much more common than society had ever previously realized.

The 1980s hosted more conversations about bisexuality in mainstream American culture, including a moral panic during the AIDS epidemic in which bisexual men were frequently blamed for the spread of AIDS. New solidarity networks like The Boston Bisexual Women’s Network, the Bay Area Bisexual Network, the Bisexual Resource Center (BRC), and BiPol, the first bisexual political organization. In 1984, BiPol held the first bisexual rights rally, outside the Democratic National Convention, while the First East Coast Conference on Bisexuality also took place with 150 people in attendance.

Although visibility was growing, feelings of bisexual exclusion also became more prominent. The article "The Bisexual Movement: Are We Visible Yet?" by Lani Ka'ahumanu appeared in the official Civil Disobedience Handbook for the Second National March on Washington for Lesbian and Gay Rights. This article was the first about bisexuals and the emerging bisexual movement to be published in a national lesbian or gay publication. Shortly after, the first national bisexual organization, The North American Bisexual Network, was founded.

The 1990s kicked off bisexual awareness by declaring September  23rd Bisexual Pride Day. For the next decade, American mainstream culture saw an increase in Bi+ characters, books, and celebrities, as well as the creation of more Bi+ specific organizations across the country. The first bisexual kiss on television took place in 1991 on an episode of  L.A Law, in which bisexual lawyer C.J. (Amanda Donohoe) kisses her female colleague colleague Abby Perkins (Michele Greene). A few years later, the character Nancy Bartlett (played by Sandra Bernhard) began to normalize bisexuality on the critically acclaimed show Roseanne, and even included an on-screen kiss.

As a response to growing curiosity and a lack of attention on bisexuality as a distinct identity, Ron Fox began the first large-scale research study on bisexuality in 1993, and the Klein grid expanded on the Kinsey scale to showcase more spaces and subjectivities in between strictly gay or straight. Alongside growing acceptance,  bisexual people were wanting a symbol to unite themselves. The Bisexual Pride flag was first set to fly proudly in 1998 after being designed by Michael Page.

The 2000s showcased an explosion in Bi+ characters, media, and important measures in awareness and rights. By the turn of the century, the American Psychological Association (APA)'s "Guidelines on psychotherapy with lesbian, gay and bisexual clients" officially de-pathologized homosexuality and bisexuality, stating they are not a mental illness as previously regarded. Bisexuality began to be included in sexuality studies departments at universities, and more positive media began to focus on bisexual characters. In a groundbreaking report in 2011, the San Francisco's Human Rights Commission found that the biggest majority within the LGBTQ community were the Bi+ community. In fact, the Bi+ community accounts for more than half of those who now identify as LGBTQ. In recent times, access to terms such as pansexual, omnisexual, fluid and others have emerged to give more nuance to Bi+ experiences.

Despite this, bisexuality is still considered an invisible majority. As Miranda Rosenblum notes, “The bisexual+ movement has a long, complex, and often hidden history. As a whole, the history of LGBTQ people is rarely taught comprehensively in schools, addressed in the media, or easily accessible within popular culture. For bisexual+ individuals, it's worse. The ubiquity of bisexual+ erasure seeps into history too; prominent bisexual+ individuals of the past are rarely remembered as bisexual+ (recalled as gay or lesbian instead) and the contributions of bisexuals+ to the broader LGBTQ movement are overlooked. Retelling a history that is inclusive of bisexual+ people is an important way to affirm the validity and importance of the bisexual+ experience.”

In awareness, GLAAD now hosts an annual #BiWeek campaign, and there is a growing understanding of bisexuality as its own unique identity.