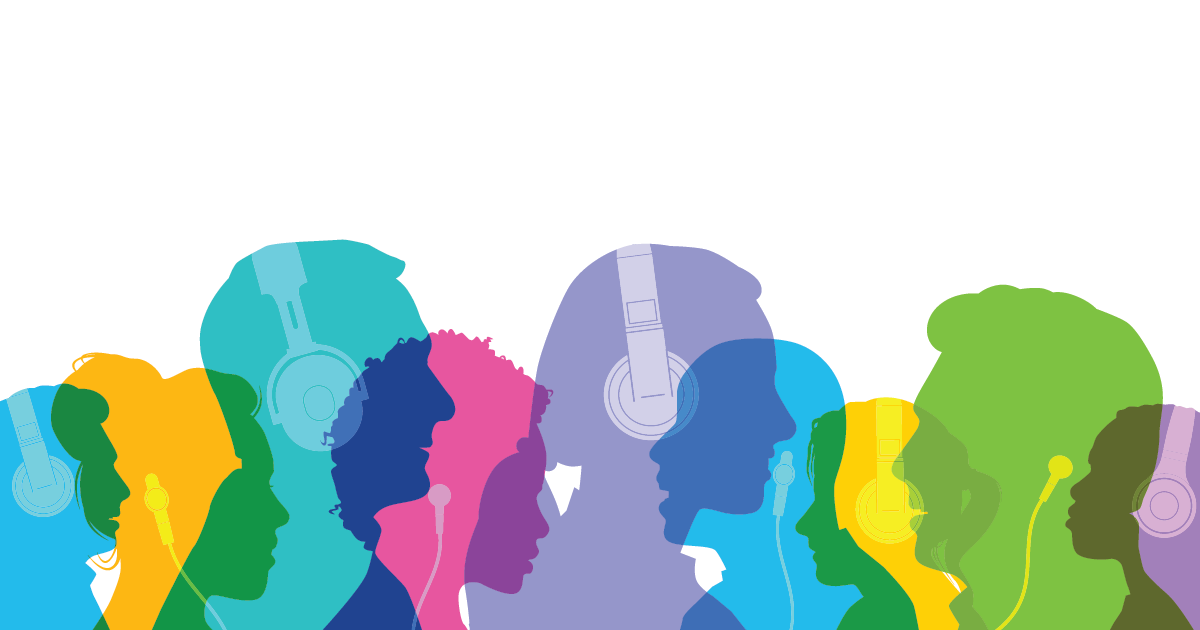 September 4, 2018, marked the world premiere of Silence Speaks, Secrets Revealed, a weekly radio drama designed to educate about child sexual abuse prevention. For 26 weeks, the Women’s Coalition of St. Croix played the show across the airwaves, with each scripted episode followed up by a live call-in show to answer questions and let listeners know how to access support. NSVRC chatted with Carolyn Forno, the Assistant Director of the Women’s Coalition of St. Croix, about the creation of the show and its impact on the Virgin Islands community.

NSVRC: How did the idea for a radio drama come about?

Carolyn Forno: We wanted to find an innovative and creative way to tackle the very taboo subject of child sexual abuse in our community. We were inspired by the radio drama “It’s Your World,” which used to play on the Tom Joyner radio show. It was a short, soap-opera styled radio drama, and listeners would tune in each week to find out what was going to happen next. If we could get people to tune in to our show, week after week, we could weave a narrative about child sexual abuse in our community that was accessible and engaging.

When we were developing our final application for funding, we were still reeling from the devastation of two Category 5 hurricanes that hit St. Croix in September 2017. Talk radio had always been a very important means of communication in our community. Without power, internet, and cable TV for months after the hurricane, radio became even more important; it was what everyone relied on to get information and entertainment. It was clear that radio was the correct medium to use to educate our community about child sexual abuse, and more importantly, provide information, tools and advocacy to survivors.

NSVRC: What did the process of planning and producing the show look like? Who was involved, and how did they get involved?

CF: This project truly took a village to make it successful!

The radio stations: In order for the idea to work, we had to partner with radio stations in our community. In the initial planning stages, we approached JKC Communications, the owner of five different radio stations, about partnering with us on this project. They had the idea for a live talk-show once a week, immediately following the airing of each new episode. They agreed to run the episodes three times a day on each station, as well as air the weekly talk show. We also approached additional radio stations about running the episodes over the twenty-six weeks. In the end, we had nine radio stations participate in the project.

The script: From the beginning, we knew that we wanted to have an advisory committee, made up of other direct service providers and WCSC staff, that would help guide the storyline. We recruited two incredibly talented writers, Sayeeda Carter and Regina Keels, who were excited to work collaboratively with the committee. The writers met with the advisory committee to develop and then rewrite and edit the script. The final product was incredibly powerful, engaging, and culturally specific.

The recording: We engaged the gifted Rolston Pemberton and Dorian Euzebe of Studio 6 Production to record and produce the episodes. For the cast, we relied on 20 dedicated volunteers, who were recruited through our and the writers’ personal contacts. We scheduled them for table readings and rehearsals, and then scheduled studio time for the recording. This was a huge undertaking. It took 28 hours over five days to record the 26 episodes, and an additional 56 hours of post-production work to complete the recordings.

The radio show: Sheelene Gumbs, one of WCSC’s long-time crisis counselors, volunteered to host our weekly live call-in radio show. She worked with WCSC staff to identify possible guests for the show. Our goal was to have community partners who could speak to the themes presented in the episodes. For example, one of the episodes dealt with a perpetrator who videotaped the abuse he committed. After that episode aired, representatives from Homeland Security spoke on-air about child pornography and how to help protect children from online predators. In total, 19 community partners, including representatives from the VI Departments of Human Services and Education, private therapists and physicians, survivors of child sexual abuse, Legal Services, and the VI Police Department, participated in the radio show.

The staff: We had two exceptional staff people dedicated to the project: Debra Benjamin, our Communications Coordinator, served as the Executive Producer of the project. Her responsibilities included coordinating the recording schedule, developing and disseminating the publicity and promotions, coordinating all aspects of the airing of the episodes, and filming and posting the episodes and radio show online. Lavonne Wise, our Fundraising Coordinator, served as the Project Manager, and her responsibilities included organizing logistics and advisory panel meetings, auditioning actors and organizing rehearsals, and assisting with the publicity and promotions. These women regularly went above and beyond to make this project a reality.

NSVRC: What was the community’s reaction to the show?

CF: We had extremely positive reactions to the show, and the awareness that it raised in our community was impressive. We took, on average, two calls on air each week, and we regularly had over 500 views on Facebook live during the weekly radio talk show. Our crisis counselors fielded approximately 30 to 40 calls and online messages per week regarding the show and the issues it raised. This included contact from people wanting to talk about their own history of abuse and to seek services. It also included contact from people asking questions about prevention and parents thanking us for producing a show that they could listen to with their children. 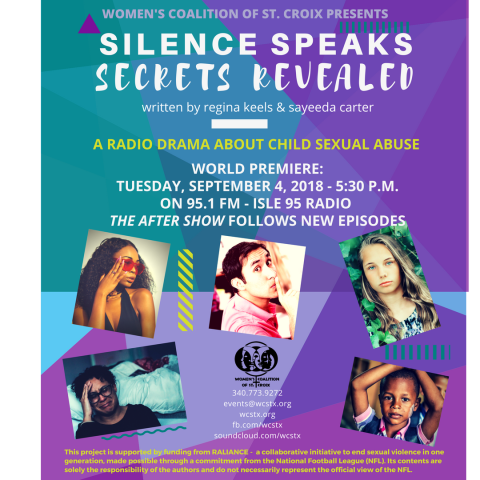 NSVRC: What lessons did you take away from this project?

CF: Child sexual abuse is pervasive in our community – Week after week, we received feedback from survivors, often stepping forward for the first time, speaking about the abuse they suffered as children. The grooming that we identified in the episodes and spoke about in the radio show hit a nerve; many survivors identified with the narrative we shared. There is definitely a need for a continued and ongoing discussion surrounding this topic.

The advisory committee and writers were central to the success of the project –  The process of writing the serial was highly collaborative, which contributed to the success of the script. The writers are passionate community leaders, both of whom are high-school teachers. They listened to the advisory committee and took the stories and challenges we shared and transformed them into compelling, culturally appropriate, two-minute episodes that we were excited to share with the community.

This project created and strengthened community partnerships – This project couldn’t have happened without the dedication of our project partners, including the radio stations, writers and studio producers, volunteer talent, and talk-show guests. Some of the partners, like the writers, were new to our work, and they have become incredible advocates who have spread messages of prevention and support to survivors through their own networks. This experience also strengthened existing partnerships and have created new avenues for referrals and access to care for survivors.

Survivors of childhood sexual abuse were empowered to come forward – We had two survivors as guests on our radio show, one male and one female. Both were adults who had been sexually abused as children. One of the survivors wrote an article for a local online news publication about his history of abuse. Our show created a safe space for survivors to share their experience and receive positive feedback from the community.

NSVRC: Did anything about this project surprise you?

CF: One nice surprise we received was from a listener who, after listening to a couple of our radio shows, wrote a poem about child sexual abuse, and called into the show to read it on air. He also gave us a copy of his poem for us to post online. It was touching to receive that feedback and to inspire others to speak out and take action.
One of the challenges we faced once we started the radio show was getting people to call into the show. We thought we would have more discussion on air with the public. However, because of the size of our community, anonymity is very difficult. WCSC staff members were private messaged after the talk show by people who were not comfortable with having their voice on-air. After realizing that people were reluctant to call into the show, we announced on air that people could submit questions through Facebook Messenger for privacy. We also announced that people could call our office to speak to a counselor without giving a name.

CF: We are so grateful to RALIANCE for taking a chance on this project and for helping us create a dialogue with our community around this very difficult subject. We are currently exploring ways to continue the project in some way. We have talked about adapting the script to a stage production and the possibility of continuing the weekly radio show. We would also love to create a teachers’ guide to use with each of the episodes. Whatever we end up doing, we know that we will continue to fight for justice and provide services to survivors of child sexual abuse, as well as create safe spaces for survivors to share their stories.

Listen to the episodes at: bit.ly/SilenceSpeaksSecretsRevealed