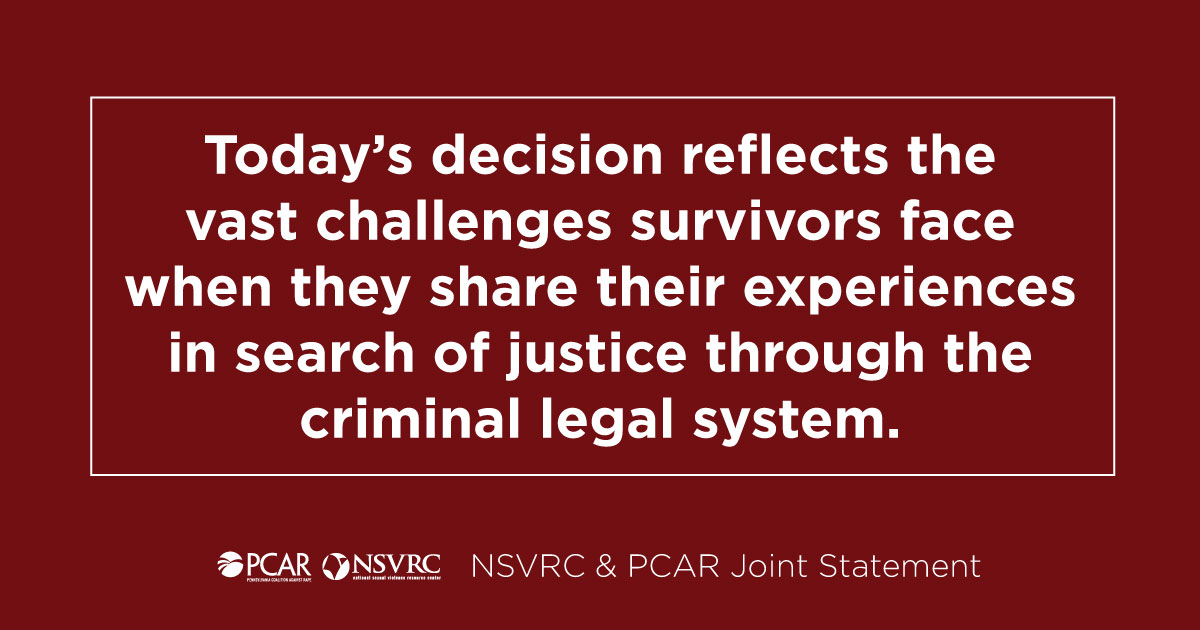 We are outraged, disheartened, frustrated, and hurt on behalf of all survivors following the decision rendered today by the Pennsylvania Supreme Court in the appeal of Bill Cosby’s 2018 conviction on three counts of aggravated indecent assault.

Today’s decision reflects the vast challenges survivors face when they share their experiences of sexual harassment, abuse, and assault in search of justice through the criminal legal system. Far too often, multiple victims must come forward before sexual assault allegations are taken seriously. Cosby will be released because of a technical legal interpretation, even after multiple victims bravely testified in court. The dynamics of this decision remind us that while the criminal legal system is an important avenue for some survivors to seek justice and healing, it cannot be the only one.

This outcome has an immeasurable impact on survivors of sexual abuse across the country, many of whom are feeling outraged, retraumatized, and devastated. We know many survivors, who already face disbelief, blame, and threats of retaliation, are rightfully questioning why they should come forward against their abuser when there are so many public examples where the person who committed the abuse evades accountability. When people who sexually abuse others, like Cosby, are not held accountable or walk free, it directly or indirectly sends the message that sexual assault and its impact on victims is not taken seriously.

This decision does not diminish the progress made during the #MeToo movement. We will continue to hold those who commit sexual violence accountable, regardless of their position in the community, their power, their fame, or their wealth. We continue to support Andrea Constand and all the women who courageously took the stand during Cosby’s trial to share their experiences and help the jury understand the pattern of behaviors Cosby used to manipulate his victims. We support all survivors in their journey to heal and continue to advocate for a more fair and equitable judicial system.

The Rape, Abuse, & Incest National Network (RAINN), organizes the National Sexual Assault Telephone Hotline. The Hotline is a referral service that can put you in contact with your local rape crisis center. You can call the Hotline at 1-800-656-4673, or access RAINN’s online chat service.

In Pennsylvania, you can find your local rape crisis center by visiting www.pcar.org or by calling 1-888-772-7227.

For more information on the Cosby case and guidance for the media, explore NSVRC’s collection of Cosby Trial Coverage.