As our use and dependence on technology grows, younger audiences have begun using the internet, online games, chats, and video calls more frequently. While these are often opportunities for kids and teens to learn, they can also be opportunities for abuse to happen. It is important that the caring adults in kids’ lives know how to recognize when abuse may be happening online or in-person and how to prevent it.

Spotting signs of abuse virtually for caring adults and educators

A victim in an abusive situation at home, especially a child, may not be able to directly communicate about what is happening to them. Caring adults outside of the home, such as neighbors, extended family, friends, educators, and employers can look out for red flags that may indicate domestic or sexual violence.

If you are concerned that a child is in an unsafe situation at home, you can contact the Childhelp National Child Abuse Hotline for local resources and referrals.

Children are not the only ones who may be vulnerable within the home. If you suspect that someone you know is a victim of domestic violence, you can contact the National Domestic Violence Hotline over the phone or via live chat. Advocates can help you to identify abuse and talk through options for next steps.

Parents and caregivers can help to keep teens and kids safe while they interact and connect with others online. You can have age-appropriate conversations with teens and younger children about red flags to look out for that indicate an online friend may not be trustworthy.

People who sexually offend will target potential victims on platforms like social media, through online multiplayer games, or on chat apps. These offenders may send or ask for sexual content — meaning that victimization can happen completely behind a screen and within the victim’s own home.

Grooming is the process in which perpetrators judge how far they can push boundaries and exploit someone’s trust.

During the grooming process, people who commit sexual abuse will manipulate a victim’s trust by passing off inappropriate behaviors as normal or no big deal.

Sextortion is a crime that happens online when an adult convinces a person who is under 18 to share sexual pictures or perform sexual acts on a webcam. 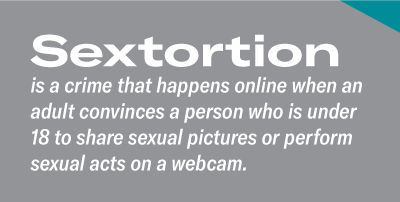 Parents can help keep teens and younger children safe by talking about some of the red flag behaviors that are indicative of the grooming process.

Parents should also always take their child seriously if they share that they had an uncomfortable online exchange with someone. Parents can also contact local law enforcement if any predatory behavior towards a child is taking place.