The Spring 2019 edition ofThe Resource looks at the wide range of prevention activities happening all across the country! Opening with tips from Berkeley Media Studies Group on how to effectively communicate about prevention, this issue also includes:

We also take a look back at the success of this year's #30DaysofSAAM Instagram contest and asked advocates what changes they've seen since in their own programs #MeToo went viral. Lastly, check out four recent additions to NSVRC's library.

The Fall 2108 edition of&nbsp;The Resource&nbsp;covers the CDC study on the lifetime cost of rape, as well as the National Coalition for Sexual Health's five action steps to good sexual h...

The Spring/Summer 2017 edition of The Resource includes the following stories:

Also included is a look at RESTORE Sexual Assault Service's prevention work in New York, a spotlight on Iowa's service transition, and four resources from the library that might interest you.

The Fall/Winter 2016 edition of The Resource includes:

Director’s Viewpoint: Karen Baker, NSVRC Director, discusses the steps the movement is taking, from the launch of Raliance to the new documentary Audrie & Daisy.

This issue also includes a look back at the first year of PreventConnect Campus, a sneak peek at Sexual Assault Awareness Month 2017, and a recognition of the Multilingual Access Project Advisory.

Do you have an idea for a future story? Send your ideas to resources@nsvrc.org with the subject line “Resource Story Idea.”

The Spring/Summer 2016 edition of The Resource highlights culture in a number of ways:

This issue also includes a look back at this year’s Sexual Assault Awareness Month, a spotlight on the Hawaii Coalition Against Sexual Assault’s Community Action Teams, and several milestones for NSVRC.

Do you have an idea for a future story? Send your ideas to resources@nsvrc.org with the subject line “Resource Story Idea.”

The Spring/Summer 2015 edition of The Resource shines a spotlight on campus sexual assault. Included in the special campus section are the following articles:

Other topics covered in this issue include: effective social media advocacy, The Six Pillars for Prevention of child sexual abuse, the 2015 National Sexual Assault Conference in Los Angeles, and more.

Want to read about a topic that hasn't been covered? Send ideas to resources@nsvrc.org with the subject line "Resource Story Idea."

The 2014 Fall & Winter edition of The Resource celebrates the 20th anniversary of the Violence Against Women Act.

Vice President Joe Biden recently deemed VAWA his “proudest legislative achievement.” In an article inside this issue, a legal advocate gives an inside look at what it was like to work on the second iteration of the landmark legislation in 1998.

Other topics covered in this issue include:

There’s even more inside! Want to read about a topic we haven’t covered? Send your idea to resources@nsvrc.org. Thanks for reading.

The 2014 Spring & Summer edition of The Resource features a cover story on campus sexual assault written by the Clery Center For Security On Campus. The article provides details on recent amendments to the Jeanne Cleary Act and how policy can be used to help protect the well-being of students. In the same vein, The University of Oregon has students talking about consent with its SexPositive cellphone app, which has been downloaded more than 10,000 times.

Other topics covered in this issue include the 20th anniversary of the Violence Against Women Act, how to protect victims’ privacy when electronic evidence is introduced, and a reflection on three years of healthy sexuality as the theme of Sexual Assault Awareness Month.

Does taking a sabbatical sound like a good idea? Read about one executive director’s three-month getaway. Looking for a creative way to fundraise? Check out a vanity license plate campaign from Virginia that has been raising money to prevent sexual and domestic violence. 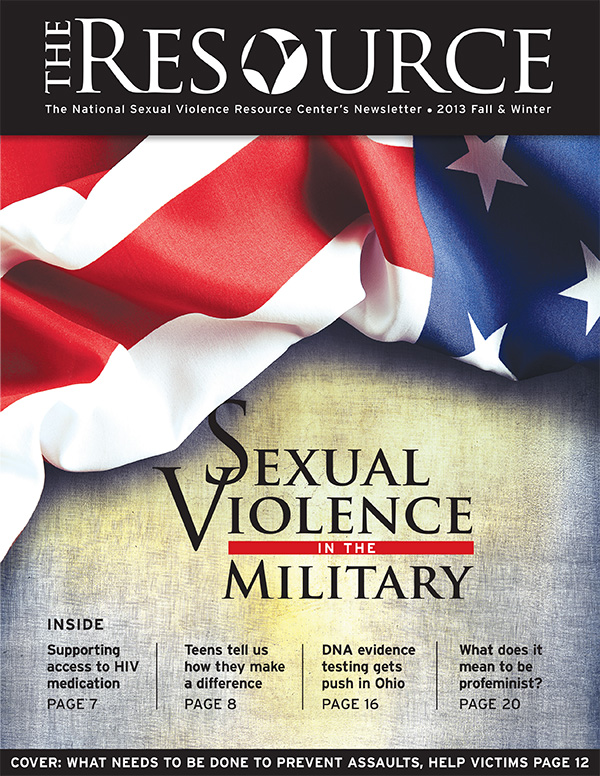 The 2013 Fall & Winter edition of The Resource includes articles on sexual violence in the military, complete with an interview with Air Force Maj. Gen. Sharon K. G. Dunbar; a youth board from Detroit and what it does to connect with peers; how the profeminist men’s movement was started and what it stands for; Ohio’s push to investigate formerly untested sexual assault kits; and how ancestral teachings are used to form prevention plans in indigenous communities. See what teenagers said when asked, “What are you doing to make your world a safer place?” View the features of the recently released Hollaback! app – then, if you wish, download it free of charge. Learn about how the Ohio Alliance to End Sexual Violence reacted to headline news cases in its backyard, and see what the New Jersey Coalition Against Sexual Assault has done to incorporate prevention evaluation in its work.