RALIANCE recognizes leaders in the movement with Honors Awards 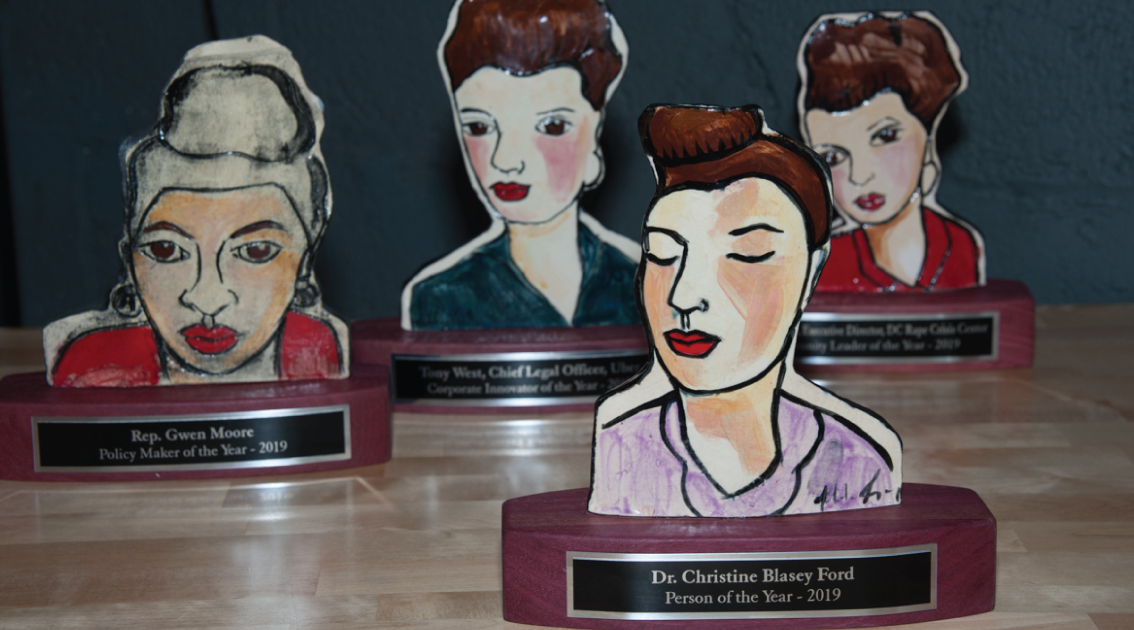 This April, RALIANCE held its inaugural Honors Awards event to celebrate leaders who are working to create a world free of sexual harassment and assault. This event, held in Washington, DC, recognized four individuals who have made change in services, policies, and industry standards.

The 2019 Honors Awards recipients were:

Last September, Dr. Ford testified in the confirmation hearing of Justice Brett Kavanuagh. Her decision to share her experience shed light on the way we respond to and support survivors of sexual assault and abuse. Her brave decision to share her story and the sacrifices she made in order to be heard have brought national attention on how crucial it is to believe survivors when they come forward.

In a letter she wrote to accept the award, Dr. Ford spoke of the impact of her testimony. “I know it has had an impact,” she wrote. “I have received over 150,000 inspiring letters, many from men and women who had never spoken of their own experience before, others from young people who no longer feel afraid to speak their truth. But that impact will only be lasting due to the work that RALIANCE, the other honorees, and many of you here tonight are doing day in and day out to make our communities and our country a better, safer, more hopeful place.”

As the Executive Director of the DC Rape Crisis Center, Henard tirelessly provides support and services to survivors on a daily basis. Justice Brett Kavanaugh’s confirmation hearings saw an influx of DC survivors seeking help, and Henard rose to the challenge to support and assist them. She has also offered her expertise to the media as well as policy makers.

In her remarks, Henard spoke about providing services to survivors on Capitol Hill during the Kavanaugh hearings. “We don’t know what the history books will say about our movement when it’s all said and done, but let’s hope they say we were bold,” said Henard. “We were courageous. We were inclusive for survivors. And at the end of the day, we not only created multiple choice gates for survivors of sexual violence, but as movement leaders, we set an example for the world in which survivors of sexual violence are the GPS in which we take our directions from.”

Congresswoman Moore has been representing Wisconsin’s 4th Congressional District since 2004. She is a strong advocate for women’s rights and civil rights and a champion for the Violence Against Women Act (VAWA).

As she accepted the award, Congresswoman Moore recalls sharing her story for the first time as a state senator in Wisconsin. She also spoke about being the lead sponsor of VAWA and working to expand protections for LGBTQ survivors and Native American women. “I just can’t wait to have domestic violence, sexual violence go the way of polio or smallpox. Rare, if never,” said Congresswoman Moore. “I think that the importance of the work that you all are doing is to bring the little girls like the Gwens of the world and the Dr. Fords out of the shadows.”

Tony West is the Chief Legal Officer at Uber and the first to remove the requirement of mandatory arbitration for individual sexual assault survivors in the rideshare industry. He has worked with anti-sexual violence organizations in order to inform Uber's policies and responses to sexual assault.

In accepting his award, West thanked the advocates in attendance. “What you do makes an enormous difference in ways that you may not even realize in the lives that you touch. And that’s one reason why this award is so humbling, so special to me. Because it tells us that we all have a role to play when it comes to lifting up awareness about sexual violence and doing something to prevent it.”