This roundtable discussion explores conversation about the effectiveness of culturally specific services provided to sexual assault survivors and the outreach strategies for our communities. 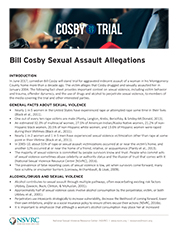 In June 2017, comedian Bill Cosby will stand trial for aggravated indecent assault of a woman in his Montgomery County home more than a decade ago. The following fact sheet provides important context on sexual violence, including victim behavior and trauma, offender dynamics, and the use of drugs and alcohol to perpetrate sexual violence, to members of the media covering the trial and other interested parties.

In response to WaPo Fact Checker: One rape is too many

In response to WaPo Fact Checker: One rape is too many

HARRISBURG, PA –  Sexual violence is complex and hard to talk about, but the fact is that sexual violence is an issue of epidemic proportions that impacts all of society. The February 12 column by Glenn Kessler in the Washington Post questions the accuracy of statistics about sexual assault, second-guesses research design and respondent ability to understand plainly worded questions, and ultimately infers that drug- or alcohol-facilitated sexual assaults are not legitimate.

Sexual violence occurs when a person chooses to exploit a vulnerability they see in another person—and this criminal behavior can take place whether or not alcohol or drugs are involved.

In fact, offenders use drugs and alcohol strategically when it comes to sexual assault: they know that someone who is severely intoxicated is often unable to stay conscious, have control of their bodies or surroundings and are likely to have gaps in memory; perpetrators use drugs or alcohol to lower their own inhibitions; and they rely on public opinion to not take reports of sexual assault seriously if the victim and/or offender were intoxicated. The offenders count on “us” to excuse their actions.

This offender strategy happens both on and off college campuses, and calling this common reality into question, or questioning statistics that have been consistently in the same range for two decades, distracts from efforts to prevent and respond to the very real and all-too-pervasive problem of sexual violence.

One rape is too many. The experience of sexual assault can be devastating, often derailing the pursuit of education, disrupting relationships, destroying a survivor’s sense of safety in the world and creating doubts about self-worth and a survivor’s ability to determine whom they can and cannot trust. Sexual assault damages campus communities and our society as a whole.

Statistics represent the stories of the countless survivors of sexual violence, many of whom were afraid to tell their friends, go to the police or confide in their families; their fears are largely rooted in the knowledge that their stories and actions—and thus their pain—are likely to be doubted by a culture that needs to do much better in listening to survivors. We appreciate the President of the United States publicly prioritizing sexual assault prevention and urging others to do the same.

The NSVRC knows that traumatizing acts of sexual violence are widespread and affect all genders, races, ages and socioeconomic backgrounds. The NSVRC is committed to sexual violence prevention, providing research-based resources and fostering collaboration at the local, state and national-level. For positive change to occur, it is imperative that we develop a full and accurate understanding of the sexual violence epidemic, both on and off college campuses. We remain steadfastly committed to improving the quality of public health services and support to victims and their families, and to supporting communities in encouraging victims to seek help and report these crimes.

The National Sexual Violence Resource Center (NSVRC), founded by the Pennsylvania Coalition Against Rape (PCAR) in 2000, creates and disseminates resources to assist advocates, allies, and journalists working across the globe to address and prevent all forms of sexual violence.

For more information, visit www.nsvrc.org. For help and services across the U.S., access NSVRC’s online directory at http://tinyurl.com/USdirectory.

NAESV released this policy statement in response to the recommendations issued by the White House Task Force to Protect Students from Sexual Assault. In the statement they discuss the continued legislative and administrative focus on partnerships, prevention, advocacy and confidentiality, training, and climate surveys.

This document provides a summary of recommendations that the Pennsylvania Coalition Against Rape and the National Sexual Violence Resource Center submitted to the White House Task Force to Protect Students from Sexual Assault. It includes recommendations for trauma-informed protocol and practices, creating safer campuses through social change, and the intentional coordination with community assets. For more information about our work to prevent campus sexual assault contact resources@nsvrc.org.

NSVRC in collaboration with the National Alliance to End Sexual Violence, the Association of Nurses in AIDS Care, and International Association of Forensic Nurses have developed this joint statement recommending that systems be established to ensure that survivors of sexual assault have universal access to medications to prevent HIV following rape.

The Association for the Treatment of Sexual Abusers (ATSA) is committed to promoting evidence-based practices and high quality research. Consistent with professional and scientific opinion in diverse fields, ATSA recognizes randomized clinical trials (RCTs) as the preferred method of controlling for bias in treatment outcome evaluations. ATSA promotes the use of RCT to distinguish between interventions that decrease the recidivism risk of sexual offenders and those programs that have no effect or are actually harmful.

This policy paper discusses public health prevention efforts to encourage a shift in focus from intervention and treatment following an assault to primary prevention -- the prevention of sexual abuse before it is perpetrated.

The Importance of Balancing the Need for Research and Participant Protection

Continued research into the causes and courses of sexual aggression is the life-blood of ATSA and essential to its mission of reducing sexual abuse. This policy paper discusses the protection of research participants as a serious concern, especially in the study of sexual aggression.