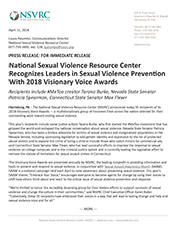 Harrisburg, PA – The National Sexual Violence Resource Center (NSVRC) announced today 35 recipients of its 2018 Visionary Voice Awards — a multidisciplinary group of honorees from across the nation selected for their outstanding work toward ending sexual violence.

This year’s recipients include social justice activist Tarana Burke, who first started the #MeToo movement that has gripped the world and reshaped the national conversation about sexual violence; Nevada State Senator Patricia Spearman, who has been a tireless advocate for victims of sexual violence and marginalized populations in the Nevada Senate, including sponsoring legislation to add gender identity and expression to the list of protected abuse victims and to expand the crime of luring a child to include those who solicit minors for commercial sex; and Connecticut State Senator Mae Flexer, who has lead successful efforts to improve the response to sexual violence on college campuses and in the criminal justice system and is currently leading the legislative effort to remove the statute of limitations for sexual assault crimes in Connecticut.

The Visionary Voice Awards are presented annually by NSVRC, the leading nonprofit in providing information and tools to prevent and respond to sexual violence, in conjunction with Sexual Assault Awareness Month (SAAM). SAAM is a national campaign held each April to raise awareness about preventing sexual violence. This year’s SAAM theme, “Embrace Your Voice,” encourages everyone to become agents for change by using their voices to shift how others think about and react to the critical issue of sexual violence prevention and response.

“We’re thrilled to honor this incredibly deserving group for their tireless efforts to support survivors of sexual violence and change the culture in their communities,” said NSVRC Chief Executive Officer Karen Baker. “Collectively, these 35 recipients have embraced their voices in a way that will lead to lasting change and help end sexual violence once and for all.”

Nominated by state, territory and tribal sexual violence coalitions across the U.S, the following is a complete list of this year’s Visionary Voice Award recipients:

Sexual Assault Awareness Month is an awareness and prevention campaign observed every April. This year’s theme is “Embrace Your Voice.” Join the campaign by accessing free resources at nsvrc.org/saam. Resources are available in Spanish at nsvrc.org/es/saam.

NSVRC is the leading nonprofit in providing information and tools to prevent and respond to sexual violence. NSVRC translates research and trends into best practices that help individuals, communities and service providers achieve real and lasting change. The center also works with the media to promote informed reporting. Every April, NSVRC leads Sexual Assault Awareness Month (SAAM), a campaign to educate and engage the public in addressing this widespread issue. NSVRC is also one of the three founding organizations of Raliance, a national, collaborative initiative dedicated to ending sexual violence in one generation.