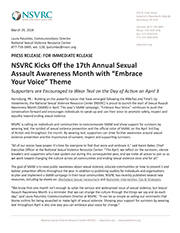 Harrisburg, PA – Building on the powerful voices that have emerged following the #MeToo and Time’s Up movements, the National Sexual Violence Resource Center (NSVRC) is proud to launch the start of Sexual Assault Awareness Month (SAAM) in April. This year’s SAAM campaign, “Embrace Your Voice,” continues to push the conversation forward and encourages individuals to speak up and use their voice to promote safety, respect and equality toward ending sexual violence.

NSVRC is calling on individuals and communities to commemorate SAAM and show support for survivors by wearing teal, the symbol of sexual violence prevention and the official color of SAAM, on the April 3rd Day of Action and throughout the month. By wearing teal, supporters can drive further awareness around sexual violence prevention and the importance of consent, respect and supporting survivors.

“All of our voices have power. It’s time for everyone to find that voice and embrace it,” said Karen Baker, Chief Executive Officer at the National Sexual Violence Resource Center. “This April, we reflect on the survivors, silence breakers and supporters who have spoken out during this consequential year, and we invite all voices to join us as we work toward changing the culture across all communities and ending sexual violence once and for all.”

The goal of SAAM is to raise public awareness about sexual violence, educate communities on how to prevent it and bolster prevention efforts throughout the year. In addition to publishing toolkits for individuals and organizations to plan and implement a SAAM campaign in their local communities, NSVRC has recently published several new resources, including tip sheets on: Workplace Sexual Harassment and Bystander Intervention Tips & Strategies.

“We know that one month isn’t enough to solve the serious and widespread issue of sexual violence, but Sexual Assault Awareness Month is a reminder that we can change the culture through the things we say and do each day,” said Laura Palumbo, Communications Director at NSVRC. “It can be as simple as calling out comments that blame victims for being assaulted or make light of sexual violence. Showing your support for survivors by wearing teal throughout April is also one way you can embrace your voice for change.”

Since 2001, NSVRC has coordinated the national Sexual Assault Awareness Month campaign observed every April. This year’s theme is “Embrace Your Voice.” Join the campaign by accessing free resources at nsvrc.org/saam. Resources are available in Spanish at nsvrc.org/es/saam.