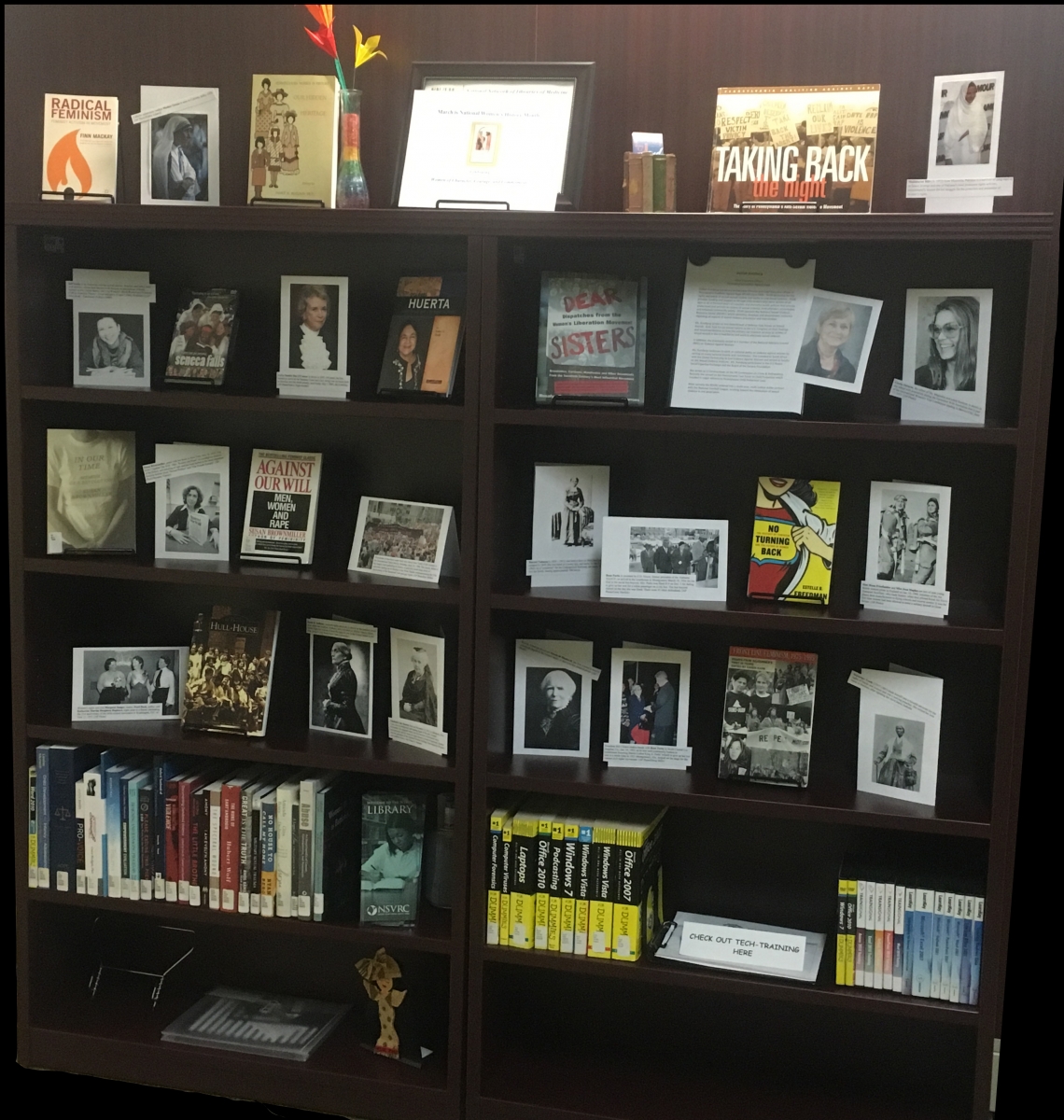 The suffragette and feminist movements have always been something that I have been fascinated with and interested in. As an undergraduate, I chose to major in history for those reasons. Since March is Women’s History Month, I am honored to write about a subject that I absolutely adore. The NSVRC Library has created a fantastic display honoring the achievements of those who have gone before us, as well as todays women who continue to fight for women within the anti-sexual violence movement. We have also included valuable resources for folks to check out and of course I’m going to highlight a couple of them to spark your interest!

The independent documentary Seneca Falls by Louise Vance, takes viewers on a journey with nine high school girls and one 10 year old boy bound for the birthplace of women’s rights in America. It is a one-hour documentary that discusses America’s first women’s rights convention, a public protest meeting held in Seneca Falls, New York in 1848. The film follows WOWER Powers, a multi-cultural teen theater troupe, as they travel from San Francisco to Seneca Falls to perform at the 150th Anniversary Celebration of this movement in American history. Through the words of leading historians and elected officials the troupe meets along the way, the audience is able to recognize the remaining needs of the women’s movement and is prompted to act on the issues that continue to exist today.

Dear Sisters: Dispatches from the Women’s Liberation Movement edited by Rosalyn Baxandall and Linda Gordon details the women’s liberation movement, which was the largest social movement within the history of the United States. The book documents and assesses the ideas and activities of the women’s liberation movement, as it took off in the late 60’s and 70’s. It paved the way for women to go from the kitchen to the boardroom, from cheering on the sidelines to playing center on the team. Baxandall and Gordon collected a variety of documents, songs, leaflets, cartoons, and position papers, that illustrate the array of people, places, organizations, and ideas that made up the movement. The book highlights historical change in areas such as, health, work, and family. It also captures the passion and diversity that defined the women’s liberation movement.

A couple of other resources I wanted to mention and one that's currently in our library display is In Our Time: Memoir of a Revolution by Susan Brownmiller. There was a time when abortion was a backalley procedure, when there was no such thing as a rape crisis center or a shelter for battered women, and when sexual harassment had yet to be defined. The book discusses such feminist icons as Betty Friedan and Gloria Steinem, and others whose contributions to change were just as profound. It discusses groups that evolved out of people's living rooms, position papers that first brought about new thinking, sit-ins, the underground newspaper collections, and the lawsuits that all played a role in the most wide reaching revolution of the twentieth century. The work contains reflections on the movement's struggles, as it attempted to give a voice to all women. For more information on the history of the rape crisis movement, I would also encourage you to check out PreventConnets wiki.

I also wanted to mention that the Ms. Foundation for Women is partnering throughout the month of March, with NBC to celebrate Women’s History Month. This is a multimedia campaign that will spotlight 31 women of diverse identities, races, ethnicities, cultures, and ages. Check out #31Days of Feminism for more information. Also, two highly important resources that are found in the library, but that I also wanted to highlight are Say Her Name: Resisting Police Brutality Against Black Women by Kimberle Williams Crenshaw and the African American Policy Forum's Did you Know?: The Plight of Black Girls & Women in America. Both of these resources are excellent examples of peices that show what many black women are up against. There are so many other resources within our library, as well as available in general that highlight women’s continued work for equality, diversity, anti-violence, and anti-sexual violence, I only hope to encourage everyone to check them out. I am honored to be a part of a continuing movement towards anti-violence and look forward to seeing how our current role will encourage others for years to come. As always, I wish you all a wonderful day and happy reading!