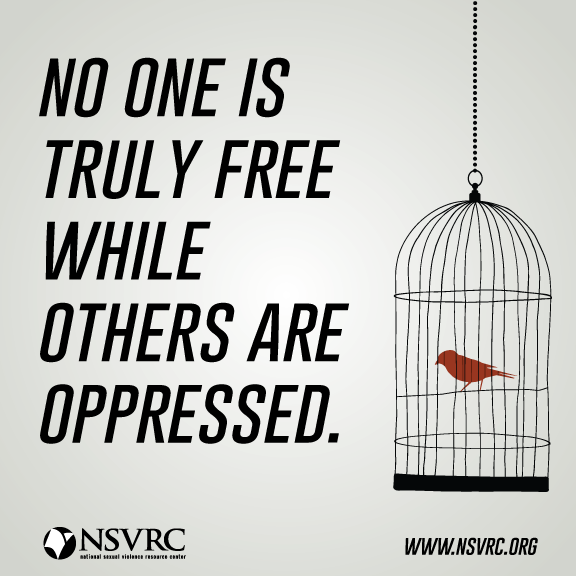 By Megan Thomas, Communications Specialist for NSVRC
During the month of January, advocates, organizations, and individuals unite to raise awareness about the issue of human trafficking. While movements like #MeToo have started to bring crimes like sexual harassment and sexual assault out of the shadows, human trafficking largely remains hidden. Putting an end to human trafficking starts with acknowledging its existence.
Learn the facts about human trafficking by using the resources below so you can help shed light on the issue. By sharing what you learn and speaking up, you can join the movement to put an end to this exploitation.
What is human trafficking?
According to the Department of Homeland Security, human trafficking is “modern-day slavery and involves the use of force, fraud, or coercion to obtain some type of labor or commercial sex act.” Human trafficking is not the same as human smuggling, which involves illegal transportation of a person across a border.
Victims of human trafficking are of all genders, ages, races, countries, socioeconomic statuses, and so on. While human trafficking can happen to anyone, people who are already in vulnerable situations – such as people experiencing homelessness – may be more likely to be targeted.
What is sex trafficking?
The different kinds of human trafficking include sex trafficking, forced labor, and domestic servitude. Sex trafficking victims may be forced, threatened, or manipulated by promises of love or affection to engage in sex acts for money. Any person under the age of 18 involved in a commercial sex act is considered a victim of human trafficking.
What can you do to get involved?
Human trafficking is an issue that touches every community, including cities, suburbs, and rural towns, but there is something each of us can do to help prevent it.
The Department of Homeland Security’s Blue Campaign provides plenty of opportunities for individuals or organizations to raise awareness about human trafficking.
The Blue Campaign’s Tools That Teach are highly visual, easy-to-comprehend resources explaining what human trafficking is and what you can do to stop it. You can download and share posters, videos, and infographics from the Blue Campaign website for free. For more in-depth information, check out their additional resources, including awareness videos, trainings, cards, pamphlets, toolkits, and more.
You can also spread the word by participating in the second-annual #WearBlueDay on Thursday, January 11. Simply take a picture of yourself, your friends, your colleagues, or your family wearing blue and post it online using the hashtags #WearBlueDay and #WeWearBlueBecause. Don’t forget to include a statement about why you are participating.
If you want to ask the experts about how organizations and industries are working to end human trafficking, check out the Facebook Live panel discussion on January 17. And help the month go out on a high note by participating in a Thunderclap on January 31, raising your virtual voice along with countless others to spread the word about human trafficking.
“No one is free when others are oppressed.” As our society becomes much more aware of many oppressive social structures and crimes, we must start to acknowledge and address human trafficking as well. It may be hard to accept that this crime exists in our communities, but we have to share the knowledge that this is a reality for far too many victims in order to change that reality. Do your part this January: hang up a poster, share a video, snap a picture, and help bring human trafficking out of the shadows.
Log in or register to post comments